Jolant is a very early variety with a mild flavour. You can use for mini-veg or grow on to harvest form August onwards. It grows vigorously and gives a high-density stem.

Not only is the leek a well known tasty winter vegetable, but its root system has the added advantage of improving heavy soils. Leeks are in the ground for quite a long time and do take a fair amount of work, but they really are worth all that effort; so its not surprising they will be found on almost every vegetable plot.

Delicious when sliced, boiled and covered in cheese sauce for a tasty addition to a roast dinner.

WHEN TO SOW
January to February under glass or March to April outdoors.
WHERE TO SOW
Early sowings can be made under glass. Sow the seed into pots or trays and cover the seed with a sprinkling of compost or vermiculite. For Outdoor sowings , sow the seed thinly, 1.5cm (1/2in) deep in drills 30cm (12in) apart in soil which has been raked to a fine tilth. Water ground regularly, especially during dry periods.
WHAT TO DO NEXT
Once early sowings have germinated transplant into individual pots and grow on under glass until April before moving to a cold frame to harden off before planting out at 25-30cm (10-12in) apart in the row and 45cm (18in) between rows. Outdoor sowings once large enough to handle , carefully lift plants and transplant to the same spacings as above using a trowel or dibber, and water in.
HARVEST
August to December
HANDY TIP
If growing for mini leeks, plant at a closer spacing of 10-15cm (4-6") apart and harvest when small like spring onions. High in folic acid, potassium, pro-vitamin A and vitamin C. 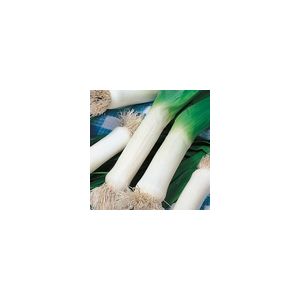